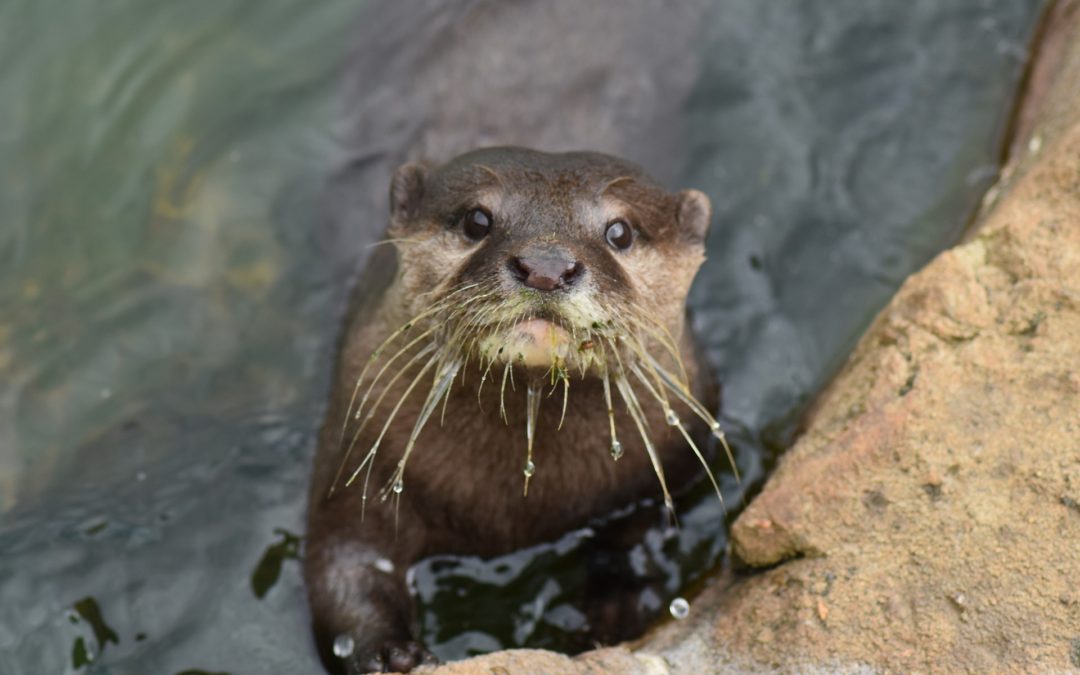 Scrolling through Twitter recently, with the usual catatonic focus social media tends the human cognition toward, my attention was caught by a headline from The Dodo (thedodo.com, @dodo) stating that baby river otters are being stolen from their families to be sold online.  My immediate thought was of some horrid concoction of young otter testes sold for the benefit of the human male erection or some other such ancient sadism, which thought was followed less angrily by an image of Brian Cohen running out of otter’s noses to sell to the PFJ at the Roman amphitheatre  (“splitter!!”).  Anyway, I was curious, and equally appalled, so snapped myself out of my Twitter coma and followed the link to the article (written very nicely by Sarah V Schweig).  A few sentences in was a tweeted image of a baby otter standing on someone’s hardwood floor, front paws being held and boogied about by its new human owner as though otters were born with a Travolta instinct, twirling around in circles, generally seeming to have a lot of fun, like our own babies do when we play with them thusly.  It’s the kind of play human babies NEED (and do also appear to want) to enhance their gross motor skills, their socio-emotional development, etc.  Not so sure about baby otters, but I may very well be wrong.   Regardless, under the image was tweeted the response, “Oh my goodness gracious… I want… No, scratch that — I NEED AN OTTER IN MY LIFE RIGHT NOW!!” [sic]. Firstly, my question was, in what universe does a human being need an otter in their life in such a way as to uncharitably rip it from its nurturing parents and ecosystem?  Human selfishness astounds me in these cases with its relentlessness and vigour.

But then I begin to wonder, not for the first time in my life, why it is that we appear to have lost the important distinction in our daily lives between the concepts of wanting and needing.  I have an idea that possessing the ability to erase the line of definition that can and probably should be drawn between these two verbs and their meanings is a decadence most commonly to be found among the more privileged of us with time on our hands and money in our pockets.  I am in no way immune from the blurring of my own cognition when it comes to deciding whether I really need something or just want it.  I’ve gotten better at differentiating with age, partially due to the realization that I don’t like clutter and so find myself running trips to the Goodwill drop off centre at least once a year to relinquish myself of the energy sucking reality of simply having too much stuff.  Each year my haul of used clutter is on one hand decreasing the good will that Goodwill provides to our community, while on the other hand decreasing my contribution to superfluous consumerism, which, at the end of the day, is my selfishness, but at least I find myself with more energy with which to contribute my own good will to society, thus hopefully balancing things out nicely.

Perhaps we can all do better when it comes to giving a little more thought to whether we need to buy that really cool and aesthetically pleasing cell phone case when we already have at least two others that are still perfectly able to do the job they were designed for, if for no other reason than to help curtail our contribution to the massive oceanic islands of plastic which penguins are beginning to inhabit. Certainly, we want that trendy iPhone cover!  Absolutely.  There are so many things we all want, even those of us who insist we don’t need more stuff; we still want the stuff.  And very often we want it so badly, we forget we don’t need it because we have mastered the ability to trick our brains into believing that wanting and needing are the same damn thing.

However, were you to pick up a Victorian novel right now, say Austin, Dickens, Eliot, or Bronte, and flip through the pages you might find an unfamiliar use of the word want.  Take for example Chapter II of George Eliot’s The Mill on the Floss in which Mrs. Tulliver, in speaking with her husband about the preparation of “a couple o’ fowl” in anticipation of having the “aunts and uncles to dinner next week”, states, “There’s a couple o’ fowl wants killing!” [sic].  Confusing though this grammatical use of want may be to our contemporary minds (and even though I teach English language, I’m still struggling to correctly identify this grammar… is it passive?), it’s quite clear from the context that want means that Mrs. Tulliver needs to kill a few chickens in order to feed her family, a necessary human requirement (or wants her husband to do it… and perhaps that’s another reason for the grammar here); we can be reasonably correct in thinking that the birds don’t actually have a death wish!   But we don’t use this form of want these days and so have no excuse for the merging of our wants with our needs.  More importantly perhaps, we should consider the opening line of Jane Austin’s Pride and Prejudice: “It is a TRUTH universally acknowledged, that a single man in possession of a good fortune, must be in want of a wife.” [sic] These days we rarely see want used as the object of a preposition, so it can be a struggle to get our brains around Austin’s semantics, but we do need to try to understand what she meant grammatically.  Prepositions are most often used to show relationships in time and space and are usually followed by a noun or noun phrase.  In the example provided by Jane Austin, want is not a verb, an action, but rather a noun, a state of being.  To be “in want” of a wife would mean that a man is in a place and time in his life where having a wife would be a very wise decision, not because it might be something he wants (in our 21st century understanding of the word), but because it is a necessary part of life, such as they saw life in the early 1800’s.  I am certain that the currently emerging MGTOW (Men Going Their Own Way) movement would disagree with dear Jane here, but any argument they might propose to her opening line would be pre-emptive because Jane was, I think, somewhat their predecessor.  The MGTOW may do well to read Pride and Prejudice, or at least Jane’s next paragraph: “However little known the feelings or views of such a man may be on his first entering a neighbourhood, this truth is so well fixed in the minds of the surrounding families, that he is considered as the rightful property of some one or other of their daughters”. Here, I am not trying to align myself with the MGTOW even though I am a WGMOW; I see absolutely no impediment to marriage other than the fact that sometimes it just doesn’t happen, as in the case of Jane Austin herself.  Those of us who may be “in want” of a husband or wife are often doing just fine by ourselves.

And so again we find ourselves where need and want have become conflated in our current place and time.  Most people do want a spouse, I believe, and so many get one quickly without considering the need; “My poor body, madam, requires it.  I am driven on by the flesh, and he must needs go that the devil drives” admits the Clown, in Shakespeare’s All’s Well That Ends Well, when asked by the Countess why he will marry (I,iii,27). Hmmm.  As usual, Shakespeare confuses and amazes.  Does the flesh need, or does it want, or both (both, being often the case with Shakespeare)?  Or if we must need, is that the same as wanting?  Anyway, could this hasty jump into the marriage bed be another contributing factor to the increased divorce rates in our time (of course realizing that these days our rocks are long gotten off before bestowed upon the finger… as the devil drives???)?  Or have I missed the reality that in truth, those who seem to marry quickly have just been very lucky in meeting the right person?  Many single people might simply be arriving at the conclusion, after long searching for a suitable partner, that, even though they do emotionally want a spouse, they don’t rationally need one.  It is a shame because there are many benefits to the state of marriage, many of them psychological and physiological ones that we do all seem to need.  Or do we?  I for one am still trying to wrestle with the needs and wants of this question. However, I’m reasonably certain that even those most adamantly against marrying would, with little hesitation, unite themselves with another were that other to possess the right qualities (qualities, I might add, which I think we have possibly managed to miss-prioritize in deference to our wants).

So, what is it that you want?  And do you actually need it?  I am absolutely positive that no-one needs a baby river otter for a pet, but then again, do we even need cats or dogs in our homes?  Many people want, and so get, cats and dogs (especially puppies and kittens) only to drop them off at the local Humane Society, or abandon them in an open field, or toss them in a quiet river tied up in garbage bags months later!!  Did those people think about the distinction between what was needed and wanted when they first brought little Fluffy home? I am doubtful. But I am even more doubtful that we human beings are likely to bring our wants back into balance with the simple harmony of life.  I am hopeful, for us all, and want to reach this place of peace and enlightenment for myself. However, whether any of us need or are in want of enlightenment is, of course, a question reasonably prominent in our time, and warranting further consideration.